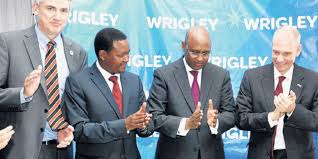 US confectionary giant, Mars Incorporated, has announced plans to set up a Sh7 billion factory in Athi River as part of the ongoing expansion of Wrigley, its chewing gum subsidiary.

The confectionary giant made the announcement yesterday when its director Victoria Mars met President Uhuru Kenyatta at State House, Nairobi.

Once operational, the Wrigley’s factory will produce about 7.8 billion pellets of chewing gum annually in a move that is expected to grow the brands market-share in Kenya.

Euromonitor International has ranked Wrigley East Africa as the leader in Kenya’s chewing gum market with 87 per cent stake in 2017, followed by Mondelez International (five per cent) and Lotte Confectionery Company (four per cent).

Mr Kenyatta pledged his government’s support for local and international manufacturing firms, saying investing in strong industries will accelerate the achievement of his Big Four agenda.

“Your goal to boost local manufacturing capacity is timely and offers a great opportunity to expand employment and job creation for Kenyans, while cementing the country’s position as a key industrial hub in Africa. Wrigley is keen on growing and developing our business here and contributing to this noble objective,” said Ms Mars, who is also a board member and immediate former chairperson of Mars Incorporated.

Wrigley opened its first factory in Kenya in 1972, which is the multinational’s only manufacturing plant in Africa, serving Uganda, Tanzania, Rwanda, Burundi, Ethiopia and South Sudan. Ms Mars said the company’s new plant, which is being built on a 20-acre piece of land, is in response to growing opportunities in these markets.

Mars Inc. is famous for its chocolate division and confectionary brands such as Mars, Twix, and M&M’s. The company has five additional divisions: pet care, Wrigley, food, drink and symbioscience.

Euromonitor says that Wrigley’s PK, Doublemint and Extra brands, are the top three bestselling chewing gums in Kenya adding that “the company’s position can be attributed to intensive marketing activities, brand variety and affordable product pricing.”

The international research firm classifies Kenafric industries in a different category from Wrigley, placing the family business as the market leader in the sugar confectionery industry with a 21 per cent market-share. The research firm projects that Kenafric’s market-share is set to drop owing to increased health campaigns against processed sugar.

“Growing health awareness among Kenyans will slow down growth over the forecast period, with rising knowledge of the dangers of over consumption of sugar set to give sugar confectionery a negative connotation, particularly among upper and middle income consumers, who can afford to be more discerning when it comes to what they eat,” the research said.