There is no substitute for experience. This saying is debatably an old clique but it perfectly accentuates the dominance of Chinese construction firms in Kenya’s infrastructure development arena. “Things have changed as travel is now seamless and smooth, unlike in the past when roads were patched with potholes and were in extremely worrying state,” says Daniel, a psv driver using the sh.32 billion Chinese-built Thika Super-highway.

It is no longer a surprise to see a Chinese national freely mingling with locals or hearing a Kenyan speaking Chinese. Perhaps the chemistry formed over the past years is attributed to a ballistic level of interactions from the Kenya-China government bilateral ties to the common mwananchi levels.

With an eye for quality, time consciousness and provision of first class service, contractors from China have reigned supreme in a litany of mega projects in Kenya. If seeing is believing, many Kenyans have been awed by the attitude and commitment of Chinese contractors on timely delivery of projects. “Chinese contractors are well armed with vital tools of trade, their commitment in professionalism has effortlessly earned them the much needed respect that will help them win more tenders,” says Alice Achieng, a frequent user of the Chinese-built  Outer Ring road. 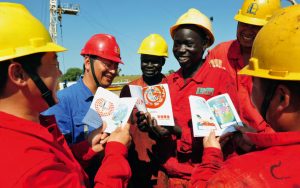 The development sector has witnessed an acute rise in Chinese involvement in project execution. It is noted that over 50 firms from China are now operational on the Kenyan soil. The firms have gobbled up a majority of projects in both the public and private sector ranging from roads, railway, bridges, power stations, dams, buildings and real estate.

State-owned China Road and Bridge Corporation (CRBC) is currently on the final stages of the multibillion standard gauge railway. The $13.8bn line will link Nairobi and Mombasa and is the biggest project in Kenya since 1963. The rail will later network Kenya with Uganda, South Sudan, Rwanda and Burundi.

The Nairobi-Mombasa SGR line. It is the biggest project in Kenya undertaken by the China Roads and Bridge Corporation. (Image: courtesy/eamb)

China Wu Yi Construction Company Limited, one of the top brasses in the league, had worked on over 18 key projects by 2013 and has won a number of tenders for upcoming projects that span up to 2025. The firm is the brainchild behind the success of the $1.23bn modernization of Jomo Kenyatta International Airport, sh.2.3bn 22-storey University of Nairobi Towers, sh. 2.1bn 21-floor KCB Plaza, sh. 10.4bn Garsen-Witu-Lamu road and the China WUYI Plaza in Nairobi among other massive projects.

The Chinese expertise have diversified their services and offer hands-on experience in construction of mega malls and churches. China Jiangxi which constructed the 39-floor Hazina Trade Centre, is undertaking the sh.1.3bn ICPAK building on Thika Highway which features a 12-storey office block, a shopping mall, hotel and furnished apartments. Zhongxing Construction Company constructed the Cardinal Otunga Plaza while Fubeco Limited executed fine workmanship on the Catholic Church of Our Lady of the Rosary in Kiambu County.