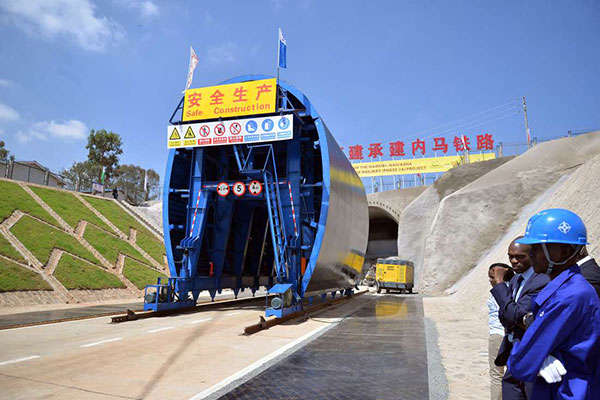 Kenya and Uganda will hold talks with China Exim Bank officials October, which could unlock funding for the Malaba-Kampala standard gauge railway.

Ministers of finance and transport from both countries will meet with China Exim Bank officials in Beijing in October, where Uganda is expected to receive the final funding approval.

“The ministers for transport and finance of Kenya and Uganda are supposed to have engagements with China Exim Bank on the sections of Kisumu to Malaba to Kampala.

“Uganda has already submitted their requests for funding for its route and is awaiting appraisals,” a source told The East African.

It is also understood that executives from China Exim Bank will be in Kampala this month to carry out due diligence on the project’s proposal and contract application before negotiations are completed.

“The officials will also visit Nairobi and hold key talks with Kenyan officials over the last connection of the Kenyan SGR, which is key to Uganda as its completion will give viability to the Ugandan project.

“They will be considering granting Kenya more financing  to Kisumu only if there is a commitment to reach Malaba,” the source said. Kenya Railways managing director Atanas Maina said that Kenya is yet to submit its funding proposal for the section between Malaba and Kisumu as they need to finish the third phase first.

“We recently had engagements with Uganda over this last phase. However, we are yet to submit the funding request for Section 2C, because we felt we needed to finish up the 2B before moving on to the last section. We have already submitted the application proposal for its funding,” said Mr Maina.

Last month, President Yoweri Museveni approved a plan to borrow $2.9 billion from the Exim Bank of China for the 273km Malaba-Kampala section.

If successful, Kampala hopes to start mobilization in November before an official ground breaking for the project is done before the end of the year.

Construction is expected to take three and a half years.

In May, Kenya announced that it was seeking an additional $3.59 billion loan from China to extend the standard gauge railway from Naivasha to Kisumu, leaving out the details of the now controversial last phase to Malaba. Kampala, which has been struggling to get funding commitments from China for its initial 293-kilometre stretch between Malaba, at the Kenyan border and Kampala has said that Kenya’s confirmation on building the last SGR link will unlock its own funding.

In an earlier interview, Uganda’s Finance Minister Matia Kasaija said that China’s Export-Import Bank had indicated that it would only make the funding of the project available if Kenya extended its line to the border.

“We have to wait for our neighbours to decide on the plans for the last phase of this project before we can get the funds. China really doesn’t want to fund a white elephant project,” Mr Kassaija said.

In February, a joint visit to Beijing by Kenya and Uganda’s finance ministers flopped.

China has been seeking Kampala’s guarantees on compensation for those people affected by the project and a new feasibility and bankability study showing that construction of the SGR makes business sense.

In June, Kenya’s Transport Cabinet Secretary James Macharia was in Kampala, where Kenya committed to finishing up its side of the railway.