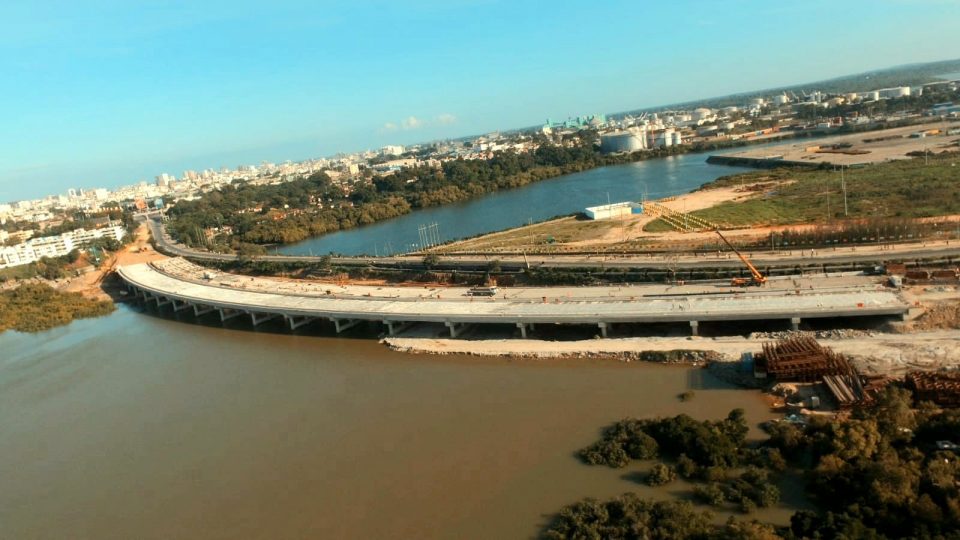 Among the projects are the Ksh 22 billion Dongo Kundu Bypass Highway, also known as Mombasa Southern Bypass and the Ksh 4.5 billion Makupa Bridge.

The KeNHA senior official while inspecting the projects lauded the ongoing progress terming it as a ‘game-changer’ and noting that they would go a long way to solve some of the socio-economic problems faced by the people in the coastal region.

The KeNHA DG said the Makupa Bridge contractor China Communications and Construction Co. Ltd and the contractor of phase two Dongo Kundu bypass a Japanese consortium, Fujita Corporation-Mitsubishi Corporation, were accelerating works on-site as they seek to complete the projects.

The Dongo Kundu bypass is an important transport corridor for traffic destined to and from Tanzania and to and from the interior of Kenya and beyond.

The bypass will decongest Mombasa Island and four bridges will be built in the swamps and across the open ocean water, as part of the highway.

He said the 8.96-km dual carriageway project involves the construction of an interchange at the Likoni-Lunga Lunga highway and the erection of two bridges one at Mwache – spanning 660 metres, and another at Mteza straddling 1,440 metres.

The KeNHA DG said the 457m long Makupa Bridge will replace the historic Makupa causeway that links Mombasa Island to the mainland.

The 120 meters Makupa causeway structure between Tudor and Port Reitz creeks was built in the 1920s by the British colonial government and it has reportedly been interfering with the natural oceanic waves, the free flow of aqueous oxygen and it has also been a cause of damage to fish breeding grounds, besides causing pollution.

Eng  Omwono said the Makupa Bridge will help end delays and reduce accidents and will finally restore the status of Mombasa as a full Island city.

“Inland bound traffic of the Makupa Bridge is open but outbound traffic is yet to be opened because the approach roads are still ongoing,” he said and asked the contractor to complete the remaining works at a faster pace while maintaining quality in all the works.

The KeNHA boss spoke when he undertook a tour of the projects to inspect the progress accompanied by Coast Regional Commissioner (RC) John Elungata and the Director of the Presidential Delivery Unit in the Coast region, Polycarp Onyango.

He said the projects will lower the cost of doing business in the region by lowering vehicle operating costs, reducing travel time, and improving mobility.

Dongo Kundu project resident engineer Moses Mwakira said the construction of the projects will make the region and the country a hub of transportation.

Eng  Mwakira said the Dongo Kundu Bypass project is 53 per cent complete, and to be operational in 2024 adding that the bypass will provide alternative routes to the South Coast, reducing Likoni ferry congestion.

Elungata while appreciating the scope of the projects said they will facilitate trade and movement to and from neighbouring Tanzania via Kwale hence fostering regional cooperation.

The RC said the Dongo Kundu Bypass is seen as the solution to congestion at Likoni Ferry, which is blamed for the slow growth of the south coast region.

“Once phase two of the bypass is complete it will connect the west mainland to the south coast through Tsunza, and open all the hinterland in Kwale county while reducing traffic at the Likoni crossing channel,” he explained.

He said once all sorts of the ongoing works are completed, people will get more convenience in travel and the areas will get developed at a faster pace.

The RC said the ongoing mega projects have raised the demand for construction materials and created thousands of jobs for locals changing lives and livelihoods while infrastructure is being delivered to the hinterland.

Elungata said the outgoing president Kenyatta’s government had a policy of ‘leaving no one and no place behind in terms of development.

He said the Dongo Kundu project comes with Special Economic Zones (SEZ) which will kick off a chain of events that are expected to make Mombasa a regional logistics and manufacturing hub.

“The Special Economic Zone Development project at Dongo Kundu is one of the Vision 2030 flagship projects in the region,” he noted.

A free trade zone, the Dongo Kundu Free Trade Zone, with 6,200 sites with the ability to accommodate more than 10,000 business units is part of the planned development.