South Africa is set to raise the bar on energy consumption in airports a notch higher after its move to fully integrate solar power for its domestic airports.

Airports Company South Africa (ACSA) has announced a major stride in the aviation sector. It will set up solar energy plants to power up its domestic airports. ACSA Corporate Affairs Senior Manager Senzeni Ndebele says the incorporation of solar as an alternative power source is part of ACSA’s vision to empower environmental sustainability.

ACSA’s quest to leverage solar energy is strongly anchored on its vision 2025, which is to promote environmental sustainability. “Viability studies at various stages are contemplating installing rooftop panels of about 750 kWp to 1500 kWp at OR Tambo, King Shaka and Cape Town International Airport,’ Ndebele says. 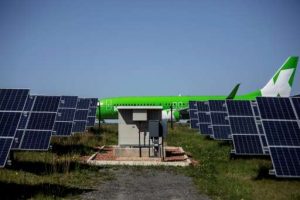 Airports Company South Africa has finalized installation of solar plants at Upington, Kimberly and George airports. According to Ndebele, the solar plants have a higher possibility of mitigating high energy production costs and control power consumption in airports. “This sustainability drive is aimed at enabling airports generate their own energy,” he notes.

South Africa hit the headlines as the first in the continent to have airports fully operate on solar energy. Kimberly airport was the first to have solar plants to facilitate its operations, followed by Upington International Airport and George Airport in the Western Cape Province.

According to ACSA, the design of Upington airport solar plant has a lifespan of 25 years and it easily generates 1 040 500 kilowatts annually. The Kimberly airport plant produces 927,000 kWh a year while the George Airport has a daily output of 750 kWp. 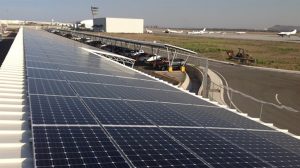 ACSA target is to address over 42 per cent of its power needs through leveraging renewable energy sources. The diversification of energy mix is still an issue of emphasis to help cut power production and consumption costs. The solar plant is a viable incentive to reduce the weight on South Africa’s national power grid.