Uganda has embarked on a major transformation program on Entebbe International Airport. The scope of the work involves expansion and automation to revamp the airport’s infrastructure to international standards.

The automation drive is funded by The Republic of South Korea and the Korea International Cooperation Agency (KOICA) on a $9.5m (sh.34bn) grant. The project which kicked off in March 2016 is managed by the Civil Aviation Authority (CAA) and it is poised for completion in 2018.

Civil Aviation Authority managing Rama Makuza said the involvement of Korea and KOICA was imperative to the success of the project as the country’s aviation sector seeks to escalate its revenue growth as well as customer experience. “We are grateful to the republic of South Korea and KOICA for setting aside a $9.5m grant for the project,’’ Makuza said. 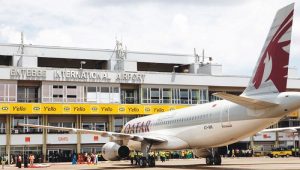 The aviation regulator said it has managed to raise a substantial amount that will ensure the project is completed on time. “We as CAA have come up with counterpart funding of approximately $250,000 (sh.896m) towards the project,” he noted. According to Mr. Makuza, the airport expansion and automation drive was borne out of a Memorandum of Understanding (MoU) signed between Uganda and The Republic of South Korea in November 2014 which sought to standardize operations, improve safety at the airport and to spur economic development.

Progress at the airport is 32 per cent complete and KOICA is working with CAA in designing an interface that will connect Uganda’s ATS Message Handling System with Kenya, Tanzania and other airports in East Africa. 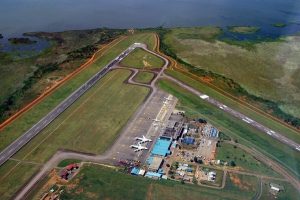 Uganda banks on restructuring its aviation sector to boost tourism and trade. After commissioning, CAA projects a rise in airport operations to a peak of 10 million passengers by 2033.

Other East Africa nations have also embarked on heavy investments in the aviation sector. Kenya has finalized the design stages of a second runway and is currently working on a third terminal (Greenfield Terminal) on Jomo Kenyatta International Airport with works 60 per cent complete and expected to be ready by the end of 2017.Tanzania is working on terminal 3 at the Julius Nyerere International Airport and the terminal restructuring project is 65 per cent complete.