Kenya is set to hold its general election this year and the frenzy has opened a package of perplexity and disquiet in the real estate sector.

The election to be held on 8th August 2017 is deeply attributed to the sluggishness in real estate as developers have halted a majority of their projects. Owing to the nasty and grisly post 2007/2008 election experience, a huge number of developers have embraced a wait and see attitude. 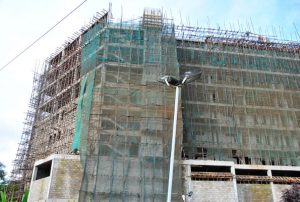 A building under construction. (Image: courtesy/eamb)

A report by real estate consultancy firm Ark Consultants indicates that real estate sector has taken a sloping curve as the industry folds its arms due to looming post-election uncertainties’. The survey shows that most developers have been diligent to avoid making investments then accumulate losses after elections. It states that investors are waiting for elections to pass so they can embark on normal activities that should start soon after elections and span up to the next general elections.

Ark Consultants Commercial Services Director Reginald Okumu says the industry is further dealt a blow after the government recently introduced capital gains tax (CGT) on rental income. According to Reginald, since the capping of interest rates on banks did not excite the real estate sector as much, the introduction of Capital Gains Tax has added more woes as developers skyrocket rents thus keeping away tenants. “The CGT demands have seen home owners hike rents, forcing tenants to stay away which depresses growth in the sector,” Mr. Reginald remarked.