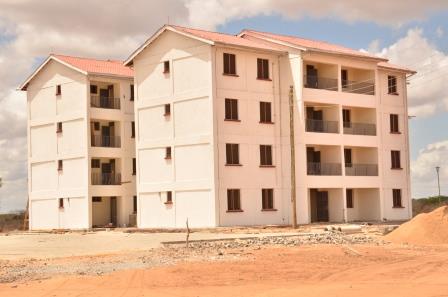 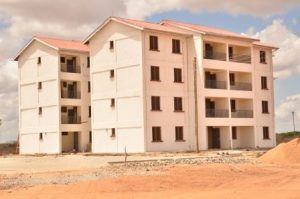 The new police building at the Tana River Divisional Police Headquarters in Hola Town on Friday 7, 2017. The Shs.120 million project is expected to be completed within the next one month.

The old and dilapidated police houses at the Tana River Divisional Police Headquarters. They were constructed during the colonial era when the current Hola Police Station was a detention camp.

County Police Commander (CPC), Walter Aliwa said on Friday that the twin three-storey building with 16 housing units would be ready for occupation within the next one month.

The construction is being undertaken by the National Police Service at the Tana River Police Divisional Headquarters in Hola at a cost of Shs.120 million.

“This is in line with the police reforms, which include the provision of modern accommodation facilities for police officers,” Aliwa said in an interview at his Hola office.

Aliwa said another 50 police housing units were being constructed at the Garsen Police Divisional Headquarters, adding that the project was expected to be completed within this financial year.

He could not however, state how much the Garsen project would cost.

The Hola project started in mid-2012 and was expected to be completed within 15 months but it has taken more than six years to complete reportedly due to funding problems.

The new housing units are completely different from the dilapidated buildings constructed during the colonial era when the Tana River Divisional Headquarters was a detention camp for hard-core liberation rebels such as the Mau Mau fighters.

Some of the old units are uninhabitable as they have huge cracks with very few or no amenities befitting officers and the new units would be a big morale booster to the few who would occupy them.

The new units are contained in a twin three-story building with a cabro-paved compound and security lights. Outside the building are two huge elevated water tanks that were expected to supply water to the officers.

Inside the units are overhead fans aimed at cooling down the high temperatures that sometimes rise to about 40 degrees Celsius.

Currently, police officers at the County Police Headquarters live in condemned buildings at the former colonial detention camps that were full of cracks.

Inspector General of Police, Joseph Boinet visited the area in February and promised that the National Police Service would improve housing facilities for all its officers.