With the erratic power supply and high electricity bills in many parts of the country, solar lighting is a viable option for Kenyans, given that solar energy is available in plenty.

Indeed, Mr Joseph Kingi of Savvy Company Ltd, which deals mainly in solar and renewable energy, says using solar energy for lighting is prudent despite some people’s misgivings about it.

“Solar energy does not have a good reputation in Kenya, especially for outdoor lighting and illumination,” says Mr Kingi. “Several people have complained about solar garden lights that stopped functioning after being rained on.” 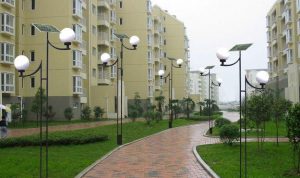 He adds that this can be overcome by waterproofing the lights. And apart from the waterproofing issue, solar lights have many advantages.

First, this type of lighting is automatic.

“Since solar lights are automatic they don’t come with a switch. Once it gets dark, they automatically come on and at daybreak, they go off,” he says.

In addition, some solar lights are equipped with motion sensors and can detect and illuminate  moving objects, says Mr Kingi. This helps alert you if there is an intruder.

The durability of these lights is an important consideration, given that this is one factor that greatly influences the purchase of many items in many families

“Solar energy lights can work for a minimum of five years before being revamped by replacing the batteries,” says Mr Kingi. “And to reassure skeptical buyers, the lights come with a warranty of up to three years.”

Mr Kingi notes, that, since solar lights are powered by green energy that is not exhaustible like hydro-electric power, they are not affected by drought.

In addition, solar lights come in different designs and are easy to install.

“We offer installation services to our buyers but we mostly encourage them to do the installation themselves because there is no need to pay someone to do something you can do yourself,” says Mr Kingi.

However, solar lighting has one main disadvantage: the initial cost of setting up the lights.

“The initial amount of money used to purchase the lights and set them up in the home is generally a bit on the higher side,” says Mr Kingi, “but the advantages of this type of lighting are positive in the long run.”

Some people are concerned about would happen during gloomy weather when there’s no sunshine.

Mr Kingi allays such fears saying: “This should not be a major worry. Once the solar lights are fully charged, they can last for between three and seven days without charging. What’s more, apart from the rainy season, Kenya is generally a hot country and it is very unlikely that three days can pass without sunshine.”