Thomson Reuters Foundation came up with a cheaper technology in the construction industry which they have applied it in Kajiado, Kenya and it’s fantastic. Justus Opiyo who lives in one of the 50 polystyrene houses in a new development in Kajiado County has testified its major advantage over his previous homes.

“It has a constant temperature even when the weather is extreme, unlike the houses I have lived in before, it is a real refuge from the heat of the Kenyan summer from January to March” he said.

The new construction technology is expanding housing sector in Kenya at a neck breaking speed by the aid of this polystyrene panels which are made of a light cellular plastic which is a byproduct of oil refining.

This panel consists of mini spherical particles containing almost 98% air. To make houses, polystyrene foam is sandwiched between two slabs of steel wire mesh for joining them together then they are sprayed with cement to anchor support and strengthen the walls.

Due to the fact that air is a poor conductor of heat, polystyrene houses have tiny air bubbles trapped in the foam so as to control climatic conditions better than buildings made of timber or concrete. Because of this special feature, the house stays cool when external temperatures are high and warm when it is cold outside.

“Construction with polystyrene is ecologically friendly, uses little water and is suitable in water-scarce urban and semi-arid areas.” Said Romanus Otieno, an urban planning lecturer at the University of Nairobi.

For Dennis Muli, an architect with Gem Arch plans in Nairobi said “The most important green benefit of polystyrene is its lightness, meaning less wood is needed to support the building. This helps reduce deforestation.”

ITS BENEFITS AND ADVANTAGES

Has a lower labor costs because polystyrene is easier to move around and put in place.

Polystyrene homes are also quicker to build, which could play a key part in reducing housing shortages in the country.

It’s safer than concrete homes, when it collapse it causes less harm and hardly death since they are very light hence can only cause minor injury.

The technology has yet to be fully cuddled by homeowners, tenants and other housing developers who are dubious about the solidity of polystyrene panels. 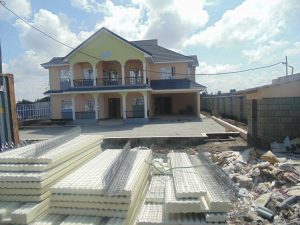 Taib Ali, a mason at the Ole Kasasi project, is often asked, “When are you completing this paper house?” People believe the homes are fragile because polystyrene can be broken with bare hands.

Mary Nkatha, who lives in a concrete home near the new building in Ole Kasasi, has yet to be convinced that polystyrene can hold the weight of a house for long. She fears it could fall down, and plans to wait and see how sustainable the buildings are before she would consider vacating into one very soon.

But architect Muli said polystyrene homes are just as durable as concrete ones, provided the correct procedure is followed during construction. Polystyrene has been a major success in countries like Japan, where it has been used in small dome-shaped homes, he added.