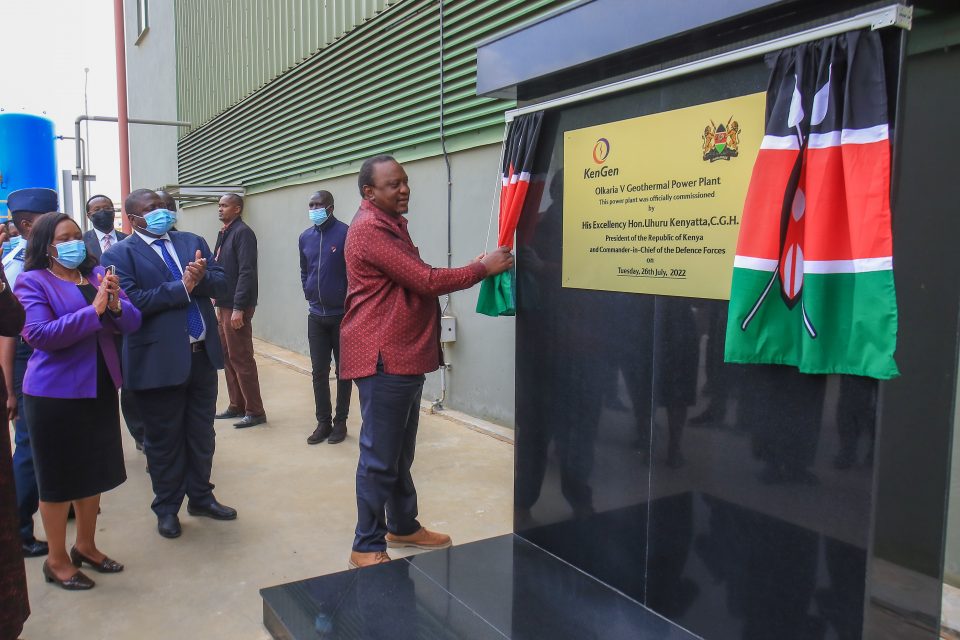 The power plant, whose groundbreaking event was graced by President Kenyatta in 2018, propels KenGen’s total installed energy capacity to 1,904MW while its geothermal capacity now stands at 799MW. The commissioning of the plant further demonstrates the government’s effort to build a greener national energy pool from clean energy sources.

Speaking when he presided over the official ceremony at Olkaria, President Kenyatta commended the KenGen team and stakeholders involved in undertaking the project which was implemented during the COVID-19 peak periods in 2020 and 2021.

The President noted that the commissioning of the power plants was aligned with the Least Cost Power Development Plan (LCPDP) in support of the Government’s Big Four Agenda.

“This is indeed a great milestone for not only KenGen but the rest of Kenyans as far as developing clean energy is concerned. Clean and safe energy is increasingly becoming vital in energy development, and it is through this approach that we shall attain universal access to electricity in our nation and meet key energy needs,” said the President.

While expressing satisfaction with the country’s clean energy development milestones, the Head of State noted that his government has put in place robust plans to ensure the country attains a 100 percent transition to clean energy by 2030.

“Since 2013, my administration has increased electricity access from 2.3 million connections to 8.6 million by the end of June 2021, thereby achieving an electricity access rate of over 75%. With 90 percent of this coming from renewables, it is my hope that by 2030, we shall have a 100 percent transition,” said the President.

During the event, Cabinet Secretary, Ministry of Energy, Amb. Dr. Monica Juma noted that the Ministry will continue to fulfill its mandate of providing clean and affordable energy for the nation with a focus on countering climate change.

“The completion of this project marks another milestone in Kenya’s efforts towards achieving energy security as well as accelerating economic growth through improved energy access. It represents an important moment in our efforts to reduce the country’s reliance on fossil fuels and create a more sustainable future for us all,” said the CS.

For his part, KenGen Board Chairman, Gen. (Rtd) Samson Mwathethe said: “This project is vital for our nation because considering that adequate supply of electricity is undeniably a primary enabler for our economic development. Through the experiences of this project, we are glad we managed to gain new experiences in geothermal development. Notably, the commissioning of Olkaria I Unit 6 propels us an inch closer to the Geothermal Gigawatt Club.”

His sentiments were echoed by KenGen Managing Director and CEO, Rebecca Miano, who noted that the company’s geothermal agenda was to increase production in line with the growing demand for power while also ensuring that the business lives up to the expectations of shareholders.

The company is also seeking to deliver over half the capacity from geothermal development and the rest from other clean sources.