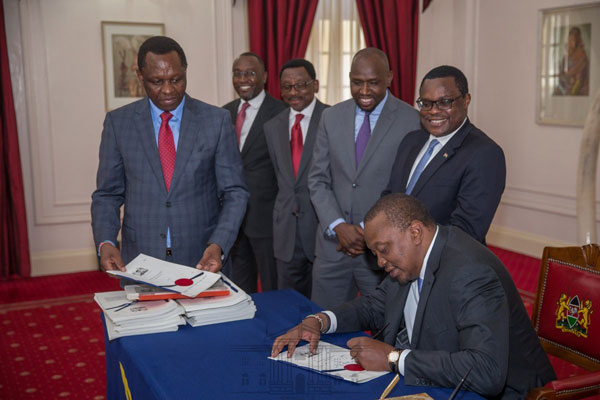 Kenyans have for a while complained about the high costs of electricity and petroleum products, which have significantly resulted in rising costs of consumer goods and the cost of living. The government’s promise that investments in renewable sources like geothermal, wind and solar would herald the beginning of cheaper electricity are yet to relieve Kenyans of the burden.

The law establishes the Energy and Petroleum Regulatory Authority, the Rural Electrification and Renewable Energy Corporation and the Nuclear Power and Energy Agency.

The Energy and Petroleum Regulatory Authority will regulate generation, importation, exportation, transmission, distribution, supply and use of electrical energy with the exception of the licensing of nuclear facilities.

It will also regulate importation, refining, exportation, transportation, storage and sale of petroleum and petroleum products with the exception of crude oil, as well as manage production, conversion, distribution, supply, marketing and use of renewable energy.

President Kenyatta also assented to Petroleum Bill which will provide a framework for contracting, exploring, developing and producing the commodity.

It will also be used to create a national policy for operations and as a reference point in the establishment of petroleum institutions. Under the new law, the national government, county governments and communities will receive a fair share of the revenue from petroleum operations. Counties will receive 20 percent of the national government’s share while communities will get five percent of the same share.

Parliament is tasked with reviewing the percentages within 10 years, while considering any necessary adjustments.

CHRYSO TIP No 1 A: Navigating Cement on the Kenyan Market