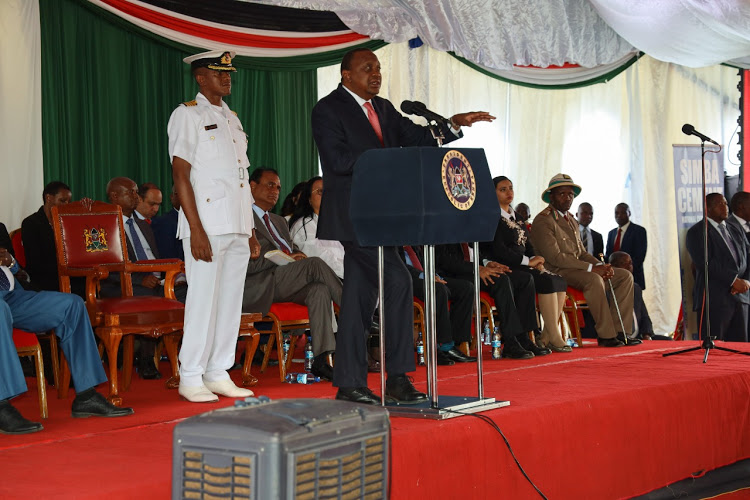 Nakuru County is set for an economic transformation after the official opening of Simba Cement factory in Salgaa. The Sh5.8 billion factory is set to change the economy of the region by creating 700 direct jobs and another 300 after its completion.

Speaking during the ceremony President Uhuru Kenyatta urged companies involved in the construction industry to leverage on the low cement prices offered by the processor to expand their enterprises. He also reiterated that the Government is keen on attracting more factories to the region.

Uhuru said Salgaa is already home to four factories and attributed to the changing fortunes of the area to Devolution, saying areas that were previously considered economically barren are now new centres of growth.

“My administration will support value addition, extraction industries and manufacturing and we will continue supporting investments targeting the economic base of each county,” said Uhuru.

The Head of State said the government will keep investing in capacity building for local industries to enable them get a share of the ever expanding international market for Kenyan products.

Devki Group Chairman Narendra Raval on Tuesday said the factory which is still being under expansion will employ a further 300 by June, bringing the total direct jobs created to 1,000.

Raval said his factory is selling cement at Sh530 in Nakuru and its environs down from Sh750. He said the factory has an installed processing capacity of 750,000 metric tonnes annually.

“Plans are underway to double the installed capacity going forward,” he said.

Petroleum and Mining Cabinet Secretary John Munyes said the demand for cement is high in the country and also in the region, especially in South Sudan and Southern Ethiopia.

Munyes noted that Kenya is endowed with huge reserves of limestone and other raw materials used in the manufacture of cement and called for more private sector investments in the sector.

Nakuru Governor Lee Kinyanjui said Salgaa is transforming into an industrial hub, adding that the county government was in the process of zoning it off as an industrial area.

As part of the cement processor’s corporate socially responsibility, the Devki Group announced that they are supporting Kenyatta National Hospital  to construct a cancer centre at a cost of Sh300 million and donated Sh100 million to KNH officials.