The Jomo Kenyatta International Airport, Kenya’s largest airport is set for a major upgrade that will see the construction of a second runway that conforms to international aviation standards.

Transport Cabinet Secretary James Macharia, who spearheaded the design process of the runway, says the current runway lacks capacity to comfortable handle any rise in plane activities without posing a risk. “Planes that are due to take off are frequently delayed to allow another to land before given a chance to take of,’’ Mr. Macharia said adding that the new runway will curb such incidences which highly affect operations at the airport. 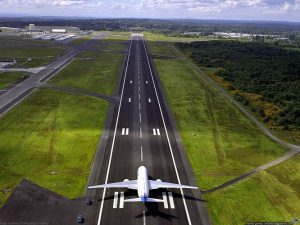 The current runway at JKIA. The airport is set to construct a new runway to accommodate larger planes.

The runway is much bigger and accommodative than the existing one will cost approximately sh.37billion. Kenya Airports Authority Chairman David Kimaiyo said the authority is working towards the expansion of airports countrywide to enable safe accommodation of both large and small planes as well as improving security around the facilities. “We are working across all airports and airstrips to increase capacities as there shall be rise in airports using them,” Kimaiyo said.

Data from Kenya Airports Authority shows an upsurge in flight activities at the JKIA in the last one year. The data indicates a 13 per cent rise in aircraft movement, which is one of the key drives that prompted the aviation authority to embark on airports expansion program.

According to Mr. Jonny Anderson, KAA managing director, construction of the new runway will increase movement of aircrafts by at least 25.45 per hour, a major boost to business. “The new runway will be an upgrade of the existing one. It will be a category two runway that conforms to international standards,” said Mr. Jonny.

JKIA is the busiest aerodrome in East Africa and has been fully dependent on the services of the current single runway which was built four decades ago. Built in the 1970’s, KAA noted that the runway was not incorporated taking into account possibilities of future advancement in technology. According to KAA, the new runway will be in tandem with International Civil Aviation Organization (ICAO) category II specifications. This means it shall have the capacity for continuous operation and enables flight diversions in cases of bad weather. 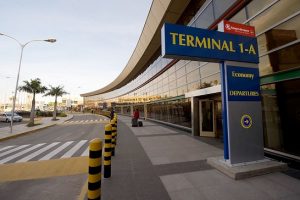 Terminal 1-A at JKIA. The airport handles over 7.5million passengers annually.(PHOTO/FILE)

The new runway will be 75m wide stretching 4.8km and shall have fog lights on the landing path unlike its predecessor which is 60m wide and 4.2km long. Once complete, the runway will have the capacity to handle new generation extra wide bodied aircrafts like Airbus A380 and Boeing B747-800. Currently, the ninth busiest airport in Africa handles over 7.5million passengers, with the modernization of existing infrastructure expected to raise the capacity to 10.5million people annually.