Kenya has officially mulled construction of its largest fresh water reservoir which will also mark as the second largest in Africa.

Located on Kibuka Falls at the junction of River Tana and Mutonga, the High Grand Falls Dam rises to 165 square kilometer high and will hold over 5.6 billion cubic meters of water that will help address the escalating demand of clean and fresh water in the country. “The dam will greatly boost the economy of this country which is the major agenda for the Jubilee government,” remarked Mr. Saitoti Torome, Planning Principal Secretary.

According to Mr. Torome, the government has agreed with China to aid in funding the ksh.150 billion project through a public private partnership and the Export-Import (Exim) bank.

The dam will provide water to irrigate over 250,000 hectares of land and provide water to at least one million homes. Noteworthy, it will be imperative to mitigate displacement of people in the flood-prone Tana delta region. 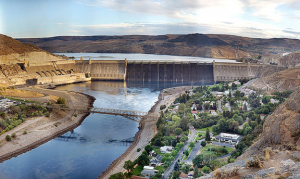 Mr. Steven Githaiga, CEO, Tana and Athi River Development Authority (TARDA) lauded the project saying it had the potential to change people’s lives as well as creating a hub of investments in agribusiness. “This project is going to improve the living standards of people especially in food security and supply of electricity,” he said. Mr. Steven believes the dam will harness enough water to motivate socio-economic development activities in the semi-arid areas since it largely passes through Tana, Kitui and Tharaka Nithi counties.

The largest water reservoir in Kenya is part of the sh.1.5trillion Lamu Port and Lamu Southern Sudan-Ethiopia Transport Corridor (LAPPSET) project. It will have a 500-700 megawatt hydroelectric power plant which shall generate electricity to curb the power outages experienced occasionally.

Works on the multibillion project will begin at  Marimanti, Tharaka Nithi county where temporary offices will be set up to facilitate easier coordination while Tseukuru in Kitui county will be the office site mandated to successfully execute the resettlement program of over 4500 people who are affected by the project.

The High Grand Falls dam is expected to be commissioned in 2023 and forms the backbone of the Kenya vision 2030. It will be the second largest in Africa after Egypt’s Aswan High Dam which occupies 2,250 square kilometers and situated on River Nile.

Another batch of five dams has been earmarked for construction to increase the country’s total fresh water capacity while generating electricity to be added on the national power grid. The dams include Hare Dam in Nyando, Arror Dam, Mwache Dam in Kwale, Sio Dam in West Pokot, Twake Dam in Makueni and the Badasa Dam in Marsabit County which is touted to have a capacity of 5 million cubic meters of water. 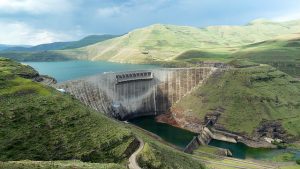 A panoramic view of Katse Dam in Lesotho. It was completed in 1996. (Image: courtesy)