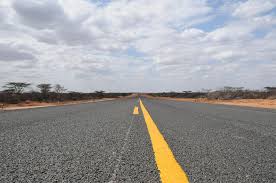 For decades, Marsabit County, Kenya’s largest county accumulating about 15 per cent of the country’s land mass has often been referred to as the wild north due to its inaccessibility and frequent bandit attacks. More so, Marsabit residents have only considered themselves Kenyans when they get to Isiolo. Thanks to an enhanced transport infrastructure, such grievances will now be history.

The almost complete Isiolo-Merille-Marsabit-Moyale highway that spans 526 kilometres is projected to boost regional and cross-border trade in the north.

One of the Kibaki era success stories, the road costing ksh. 13.7 billion is built by China’s Wu Yi construction company.

The road, part of the Lamu-Port-South Sudan Ethiopia Transport (Lapsset) corridor has also increased trade between Kenya and Ethiopia.

Marsabit County Governor Ukur Yatani says the road has not only boosted cross-border trade but also catalysed the county’s economic growth course. The road, which has only about 10km left to completion has resulted to a bee hive of trade activities in marketing centres and petrol stations that are steadily rising along the highway. Before the road, there was no petrol station on the long stretch between Isiolo and Marsabit counties.

According to Mr. Yatani, the advent of devolution has enabled bring to limelight former marginalized communities like Marsabit thus giving an opportunity to grow and they have witnessed an impressive transformation.

Two years ago, the road was impassable, rendering it difficult for Marsabit residents to get fresh vegetables and other goods. The new road has counter attacked such incidences and now fresh produce from Meru County among others reach designated markets seamlessly. Transport, importation and exportation of livestock and other goods between Meru and Marsabit has sky-rocketed, with about 30 trucks plying the route on a daily basis.

Tourism, trade and investment opportunities are now gold in Marsabit, which are deeply attributed to the 600km Kenya-Ethiopia border.

Both foreign and local investors have largely tapped into the opportunities brought by the road by venturing into motor vehicles and building materials trade, creating employment for locals.

Noteworthy, the trip from Isiolo to Marsabit that used to take three days on lorries now only takes seven hours.

As Ethiopia is a landlocked state, the Horn of Africa will now find it easy and cost effective to access the port of Mombasa. Currently, it uses Djibouti for its imports and exports but Mombasa port is much   nearer.