The time bomb has finally ticked on fake architects and quantity surveyors who use unscrupulous means to win jobs.

The Board of Registration of Architects and Quantity Surveyors BORAQS has unveiled a smart card system that will greatly curb the overwhelming infusion of fake architects and quantity surveyors in the country. Prompted by the alarming rate at which unregistered and unqualified contractors conduct their operations freely, the profession regulator has embarked on digital incentive to ensure professionals meet threshold.

BORAQS in partnership with National Bank of Kenya have introduced a smart card system that will double as an identity card and a payment card for registered and qualified professionals.

BORAQS Chairman Arch. Nathan Kureba said the smart card is a major move in the sector that will boost its mission of promoting ethical practices in creating sustainable Built and Natural Environment. “This partnership is a vital development for our organization and our members as it advances BORAQ’S presence as well as provide BORAQS members with an easy and convenient way to make payments,” Architect Nathan. 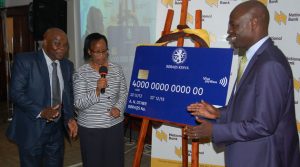 The new smart card system is a major blow to the operations of quack contractors who have badly derailed the image of construction sector. Besides creating value addition to BORAQS members, it will help streamline core ethics in the practice and seal the loopholes that quacks have leveraged and taken advantage of.

National Bank CEO & Managing Director Wilfred Musau believes the partnership is of great significance as it will instigate the current relationship between National Bank and BORAQS. “This partnership seeks to offer customized solution to BORAQS and its members through the combination of the payment and membership card functions,” he said. The system enables BORAQS card holders to make purchases at supermarkets, fuel station or restaurants as well as make payments over the internet in any currency.

According to Wilfred, the smart card is globally recognized and accepted in nearly all outlets as a safe, easy and convenient payment method. “The card is supported by Visa and has a global acceptance in over 200 countries and territories worldwide.” Wilfred remarked. Professionals under the umbrella of BORAQS will be issued the smart cards free of charge and has no initial or annual fees. It will feature numerous negotiated discounts and lifestyle benefits that will introduce architects and quantity surveyors to a world of convenience.

The smart card is expected to cut operations of fake contractors who solicit money from unsuspecting clients and end up drawing and constructing below standard buildings. Last year, the construction sector was marred with rampant cases of building collapse which was largely blamed on construction regulators. National Construction Authority (NCA) and BORAQS have undertaken extensive measures to ensure contractors are registered as practitioners with the relevant authority.