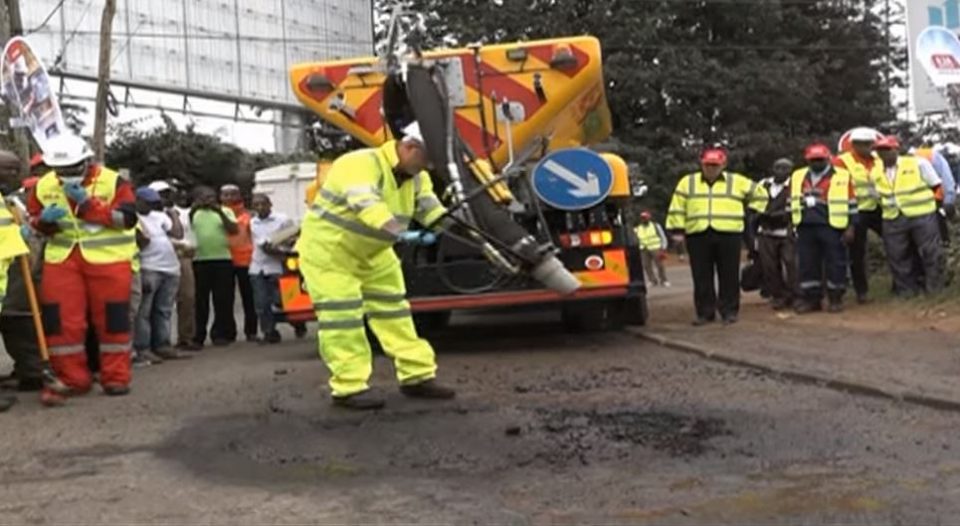 An engineer demonstrates how to use the Velocity road and pot-hole maintenance technology at the Ngong road Dagoretti Corner roundabout on February 9, 2016.

City Hall has partnered with a Nairobi-based firm in a move that will see it embark on repairing potholed roads in the country’s capital.

Nairobi County has inked the deal with AEA Limited, a subsidiary of NSE-listed TransCentury Group

, which will see the company lease or sell machinery to the devolved unit to repair damaged roads.

Addressing journalists along Kenyatta Avenue today, Governor Mike Sonko said the deal with the firm – known for its use of velocity road patching technology – will slash repair costs by up to 40 per cent.

“We are committed to working with infrastructure partners through various financing models to ensure we uplift basic road infrastructure,” Mr Sonko said Tuesday.

Velocity road patching is a technology that promises to instantly repair damaged roads at a fraction of the cost.

AEA Limited was last year appointed by UK-based firm Velocity as the sole distributor of its machines in the region, with Kenya becoming the second country in Africa to adopt its use after South Africa.

“We are targeting County Governments with the new innovative equipment so that the new administrations can save money in repeat jobs as well as speed up small scale road construction works,” AEA Ltd managing director Nicholus Kithinji said.

He says the technology has been tried and tested in developed countries and is fully compliant with the National Highway Sector Scheme 13 and Code of Practise for Innovative Patching Systems.

Mr Sonko underlined that his government is keen to tackle Nairobi’s road infrastructure problems through effective and cost-efficient methods.

He also pointed out that better roads would help cut the cost of doing business in the capital, thus leading to more jobs.

“Proper infrastructure will reduce the cost of doing business significantly in the County which will create numerous business opportunities for Kenyans that translates to improvement of the country’s GDP,” said Mr Sonko.