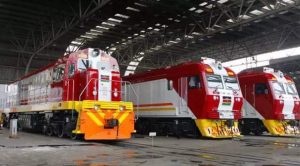 The Standard Gauge Railway locomotives. Kenya is leveraging expansion of its transport network to boost economy and improve lives in line with Vision 2030.

The long awaited Standard Gauge Railway locomotives have been well received and are docked at the Port of Mombasa, roaring one of Kenya’s biggest transport projects back to life and on a high note.

The freight locomotives which are debatably one of the world’s best were received by the Cabinet Secretary for Transport, Infrastructure, Housing, and Urban Development, Mr. James Macharia at Mombasa’s Port Reitz Station.

Belauding the arrival of the SGR locomotives as a major move in delivering quality projects in the transport sector, Mr. Macharia said all the various components involved in SGR construction are optimistic to complete the project within the estimated time and cost. “The delivery of this first batch of freight locomotives is a major milestone on this journey,” said the CS Macharia.

The first batch comprises six locomotives are docked at Port Reitz Station, which also marks as the starting point for the Standard Gauge Mombasa-Nairobi Railway line. Four out of the six locomotives are designed on model DF8B diesel with a traction engine power of 3100KW and a maximum speed of 100 km/h.

The entire fleet made of 56 locomotives will be shipped in the country by mid-year and will arrive in four batches.  Upon completion, the fleet will consist of three models: passenger, freight and shunting locomotives. According to the ministry of transport, 43 of the 56 locomotives will be transporting cargo, five for passengers, while the remaining eight are primarily be for shunting operations. 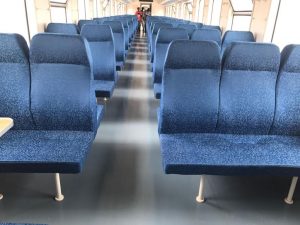 The locomotives were manufactured by CRRC Qishuyan, a Chinese manufacturing firm with a wealth of experience in making diesel locomotives.